In case you missed the launch, I have started a new turn-into-a-book series titled Unlocking the Power of Your Faith. Faith is the fifth of the 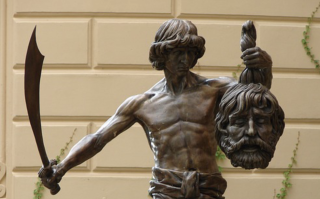 Goldmine Principles I have taught for many years, but is probably the principle I have focused on the least—although I would hope faith has been sprinkled throughout all I have written about the principles. This week, let's move on to the story of David and Goliath, one of the best-known and most-examined stories in the Bible to see what you can learn to help you unlock your faith.

When David arrived at the front line to bring supplies to his brothers, he observed that something was amiss in the camp. The army was assembled with its enemies arrayed against them, but no one was fighting! David thought it strange that there was no action, so he inquired as to the reason. It was explained to him that there was a small problem in the form of a big champion named Goliath who was too big for anyone to take on in combat. The soldiers and the king had concluded that Goliath was too big to hit, but David knew right away he was too big to miss! When David confirmed the reward for anyone who took Goliath down, he approached Saul, the king:

"Your servant has been keeping his father’s sheep. When a lion or a bear came and carried off a sheep from the flock, I went after it, struck it and rescued the sheep from its mouth. When it turned on me, I seized it by its hair, struck it and killed it. Your servant has killed both the lion and the bear; this uncircumcised Philistine will be like one of them, because he has defied the armies of the living God. The Lord who rescued me from the paw of the lion and the paw of the bear will rescue me from the hand of this Philistine" (1 Samuel 17:34-37).

David had assessed the situation and then made a bold prediction and promise to the king. In essence, he had what I call FaithSpeak and said, "Goliath is going down!" You should note that nowhere in the account does it say that the Lord directed or spoke to David to venture forth to fight Goliath. David concluded it was possible because of what he had seen not only of the present situation but also remembered how God had worked and used him in the past. He had killed the bear and the lion and in David's eyes, the only difference between them and Goliath was the giant had two legs.

When we fast forward, we see David lined up across from Goliath when he makes the same promise to him that he made to Saul:

"You come against me with sword and spear and javelin, but I come against you in the name of the Lord Almighty, the God of the armies of Israel, whom you have defied. This day the Lord will deliver you into my hands, and I’ll strike you down and cut off your head. This very day I will give the carcasses of the Philistine army to the birds and the wild animals, and the whole world will know that there is a God in Israel" (1 Samuel 17:45-46).

David did not say God had sent him but instead he said he was there in the name of the Lord and then predicted a gruesome end not only for Goliath but also for his comrades. Once Goliath said his piece, David went into action: "As the Philistine moved closer to attack him, David ran quickly toward the battle line to meet him. Reaching into his bag and taking out a stone, he slung it and struck the Philistine on the forehead. The stone sank into his forehead, and he fell face down on the ground" (1 Samuel 17:48-49). David did not wait for the giant to come to him, he went running toward the giant and, as he did, he loaded his weapon. David was so skilled that he knew what he could do and also knew the One who would help him do it. The rest, as is often said, is history.

Where are you hesitant to step forward to say and do because you don't want to say or do too much? Where have you not assessed a situation to which the Lord directed you? Where have you hesitated to do what David did: make an assessment and develop a plan of action? Is it possible that the Lord may lead you to a situation and then ask, "What do you want to do?" but not tell you what to do? David unlocked the power of his faith by doing what he knew and did best and following through on what he saw at the camp that no one else saw. You have the same capacity to see what others don't but it will be useless unless you unlock the power of your faith to do something about what you see. And it often starts by allowing your words to reveal you faith in the form of FaithSpeak. Have a blessed week.