This is it! The millesimal edition of the Monday Memo is before your very eyes. I looked up a synonym or adjective for 1,000 and found 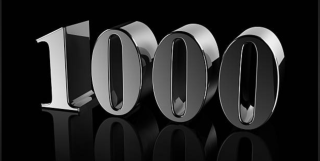 millenarian, chialilstic, chiliad, and millenial but I chose millesimal because I had never used or seen that word before. I thought it appropriate to commemorate this event with a new word after using at least a million words since 2001 when I began writing the Memo. Since the current series theme of the Memo is Unlocking the Power of Your Faith, let me share my faith lessons this week from producing and publishing 1,000 Memos.

In 2001, I had made a significant ministry transition that caused me to start over at the age of 51. I had three books, the purpose message, a mound of debt, and no friends or ministry contacts. Websites were new back then and I wanted to start one, but I noticed that most sites got few visitors after the initial visits to check it out. I didn't want that and was asking the Lord what i could do to direct more people to the site without selling something (which was still no guarantee they would want to buy and visit the site).

What's more, over the years I had heard many people say to me, "We love your purpose message, but we need to hear more from you. One sermon or workshop is not enough." So how could i allow people who were interested to hear from me more often and how could I utilize my website more effectively? Those were the two questions I put before the Lord.

From there, I had an idea to write an email newsletters and send it out to interested parties. The problem was I had no one to talk to and no idea how to launch or sustain it. In March of 2001, I spoke at a conference in Ohio and during my workshop session I asked anyone if they would like to hear from me on a weekly basis and, if so, to please give me their email address. If I remember correctly, eight people signed up. I then entered their addresses into Outlook and went off to England where I wrote the first Monday Memo. People in England gave me their emails and started to share with their friends and I would keep adding their names to my email distribution list. Then I would write the Memo, copy and paste their addresses into the list, and send it out.

As the list grew, I had to keep separate group lists by entering every email myself and taking people off when they were no longer interested. By 2006, the Memo had grown to about 12,000 readers, which was great, but my Outlook eventually collapsed and I transitioned the Memo to a blog format where people could subscribed or unsubscribe without my involvement (I estimate over the years I have entered at least 20,000 names and emails myself).

That's the history of the Memo but here is some of what I learned.

I could could go on and on, but let me say what a joy these Memos have been to write. I don't have near the readers I once had for there are now a lot more choices online for people to access and read. I had often said I would write until I hit number 1,000 and then stop, but I have changed my mind. It's not as important to me now of who or how many read them; I am writing them for what they do to and for me. They give me a weekly chance to see the Lord move in my life and give me something He can use to impact and equip others. The Monday Memo has unlocked the power of my faith and given me confidence in ministry I did not have. Now, it's hard to imagine it not being part of my faith walk with Him. Thanks for reading and have a blessed week!