Last week, we saw how God sent Elijah to a widow to save her and her son in the midst of a drought. Then we read that hard times 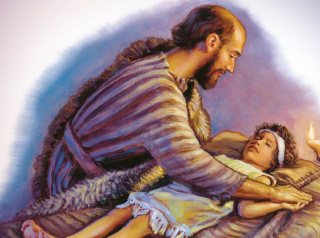 returned to the widow's world:

Some time later the son of the woman who owned the house became ill. He grew worse and worse, and finally stopped breathing. She said to Elijah, “What do you have against me, man of God? Did you come to remind me of my sin and kill my son?” “Give me your son,” Elijah replied. He took him from her arms, carried him to the upper room where he was staying, and laid him on his bed. Then he cried out to the Lord, “Lord my God, have you brought tragedy even on this widow I am staying with, by causing her son to die?” Then he stretched himself out on the boy three times and cried out to the Lord, “Lord my God, let this boy’s life return to him!” The Lord heard Elijah’s cry, and the boy’s life returned to him, and he lived. Elijah picked up the child and carried him down from the room into the house. He gave him to his mother and said, “Look, your son is alive!” Then the woman said to Elijah, “Now I know that you are a man of God and that the word of the Lord from your mouth is the truth" (1 Kings 17:17-24).

This is the first record of anyone being brought back from the dead in the Bible. Let's look at the story more closely to see what it can teach us about unlocking the power of our faith.

THERE'S A PROPHET IN THE HOUSE

Elijah continued living in the woman's home and was also fed from the woman's endless supply of flour and oil. Perhaps he was teaching the woman and her family the ways of God and the woman began to think that his presence was going to chase away sorrow and bring her nothing but blessing. When I met the Lord, i had a strange idea that I would never have car trouble again. I assumed God's presence in my life would ward off all such troubles and suffering. I was wrong and you are also wrong if you think that faith is the means to avoid pain and sorrow—that somehow faith is your room service bell that summons God's presence to meet your every need.

Then when her son stopped breathing, the woman reacted in two ways. First, she blamed Elijah and then she expressed guilt that some past sin had caused her son's death. Like the disciples who forgot that Jesus had multiplied the loaves and fish, this woman forgot the miracle of the flour and oil and went on the attack to assign blame. Instead of thinking, "God helped me one, He can help me again," she assumed the worst that her son was gone. Why would God have spared his life during the famine only to take his life in the provision? It didn't make sense, but she wasn't thinking logically.

It is evident that even Elijah expected his presence to bring only good and not harm to the woman, for he boldly asked God, "Have you brought tragedy even on this widow?" In a sense, however, it was an audacious prayer of faith, reminding God that He was the one who sent Elijah to save the boy. There have been times when I have poured my heart out to the Lord and reminded Him, in no uncertain terms, that He had given me work to do and I needed help, the kind of help only He could provide but did not seem willing to give. God is not a fragile, timid, or sensitive God who is easily offended when you are direct and honest with Him. That is not a sign of unbelief or disrespect, but the epitome of faith—trusting Him to sort it all out at that moment because you cannot.

I have no idea why Elijah stretched himself out on top of the boy three times. My only thought is that it was symbolic of the intensity of his prayer in which the prophet invested his entire being. Once again, we see that God was not disturbed in the least but heard the prophet's prayer and restored the boy's life. Then Elijah stated the obvious to the woman that her son was alive, which was something similar to what Jesus said to His disciples, "O ye of little faith." Then the woman made another declaration that God was revealing Himself through her prophetic house guest.

What are the lessons for us? First, faith is no guarantee that suffering will no longer be part of our lives. Second, learning about God is not a secret potion that guarantees all will go as we would like. Third, we can be honest with God about our doubts and still have faith, Four, we can and should boldly go before the throne of grace to remind God of His promises. Five, we must sometimes be persistent in prayer when we are facing circumstances that are contrary to the promises of God. If you want to unlock the power of your faith, you must be ready to apply it to the uncertainties of life, realizing there are no guarantees apart from God's goodness and love. Have a blessed week!