You know the story of how the Lord parted the Red Sea so Israel could pass through, and then caused the waters to return to normal. 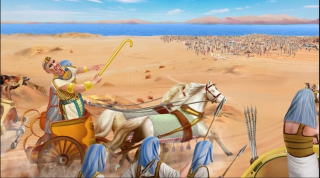 When they did, the Egyptians who were in pursuit all drowned. Let's review what happened right before the Sea parted to learn from them to help us unlock the power of our faith. We read in Exodus 14:10,

As Pharaoh approached, the Israelites looked up, and there were the Egyptians, marching after them. They were terrified and cried out to the Lord.

The people were terrified because the Sea was in front of them and their enemy was behind them. They were trapped and there was no means of escape—or so they thought. It was then that the Lord told them to move on, promising His help as they went but not before.

Moses was the leader, so he encouraged the people not to fear but to have faith:

Moses answered the people, “Do not be afraid. Stand firm and you will see the deliverance the Lord will bring you today. The Egyptians you see today you will never see again. The Lord will fight for you; you need only to be still" (Exodus 14:13-14).

Then Moses must have gone to the Lord in prayer, but you may be surprised at how the Lord responded:

"Why are you crying out to me? Tell the Israelites to move on. Raise your staff and stretch out your hand over the sea to divide the water so that the Israelites can go through the sea on dry ground" (Exodus 14:15-16).

The Lord told Moses to be quiet and have the people move on because He was going to part the sea and they would pass through on dry ground. That meant there would be no mud or debris, for when the Lord moves on behalf of His people, He does not do so in part, but fully and completely.

So now, the people had to move on toward a body of water they could not cross. The Lord did not part the water and then they moved on. They moved on and then the Lord fulfilled His promise. They had to go as far as they could go in their own ability and then God did what only God could do for them.

Has anyone ever told you to give your situation to the Lord? They meant that you should trust Him and stop fretting. Perhaps you thought that was easy for them to say because they were not facing what was in front of you. Yet, that is exactly what the Lord told Israel: "Give me this situation. You move on to the sea and when you get there, you will be able to cross it. Trust Me." Why didn't Israel trust? For the same reason you don't—they were terrified. Why don't you quit your miserable job that causes you so much grief? You are terrified. Even though God has always provided, even though He promises to continue to do so, you cry out to your leaders (government, church, or business) that "they" need to do something for you because you feel trapped.

The same holds true for why you don't write, create, travel, start your own company or ministry, or go back to school. You want the sea to part before you and then maybe you will move through. God is saying, "Stop crying out to me and move on. Raise your hand against the obstacle in front of you and I promise the mountain (or the sea) will be removed or part as you go—but not before."

God is a compassionate God, but like any good Father, at times He does not pity His children. Instead, He urges them to grow up and act appropriately according to what they have learned. That may be God's message to you as you cry out to Him. He loves and cares for you but wants you to learn how to unlock the power of your faith as you follow His commands. This week, it's time to stop looking at your sea and complaining about it. Instead, it's time for you to move toward what you fear and trust God will meet you when get up to it, but not a minute before you do. Have a blessed week!