Last week, we read how Elisha promised a childless woman a child in a year's time and sure enough, the Lord intervened and she did 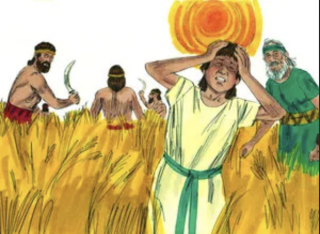 indeed give birth to a son. The woman did not want to get her hopes up only to be disappointed, but what she feared did not come upon her—until the boy was grown. Then we read,

The child grew, and one day he went out to his father, who was with the reapers. He said to his father, “My head! My head!” His father told a servant, “Carry him to his mother.” After the servant had lifted him up and carried him to his mother, the boy sat on her lap until noon, and then he died. She went up and laid him on the bed of the man of God, then shut the door and went out. She called her husband and said, “Please send me one of the servants and a donkey so I can go to the man of God quickly and return” (2 Kings 4:18-22).

Her faith child died and the woman took off to find the man of God in her hour of need. Let's examine the rest of the story to see what we can learn to help us unlock the power of our own faith.

The woman would not accept the final outcome of her son's sickness, but instead went back to her faith focus. When she found him, we read,

When she reached the man of God at the mountain, she took hold of his feet. Gehazi came over to push her away, but the man of God said, “Leave her alone! She is in bitter distress, but the Lord has hidden it from me and has not told me why.” “Did I ask you for a son, my lord?” she said. “Didn’t I tell you, ‘Don’t raise my hopes’?" (2 Kings 4:27-28).

What can we deduce from those two verses?

The woman's response is similar to what Job said when he encountered his trials: "What I feared has come upon me; what I dreaded has happened to me." (Job 3:25) but she immediately turned to the Lord, or at least His representative, to try and sort things out. Elisha immediately swung into action:

When Elisha reached the house, there was the boy lying dead on his couch. He went in, shut the door on the two of them and prayed to the Lord. Then he got on the bed and lay on the boy, mouth to mouth, eyes to eyes, hands to hands. As he stretched himself out on him, the boy’s body grew warm. Elisha turned away and walked back and forth in the room and then got on the bed and stretched out on him once more. The boy sneezed seven times and opened his eyes. Elisha summoned Gehazi and said, “Call the Shunammite.” And he did. When she came, he said, “Take your son.” She came in, fell at his feet and bowed to the ground. Then she took her son and went out (2 Kings 4:32-37).

I remind listeners and readers regularly that faith is not an event but a lifestyle. It is not something you exercise when you absolutely need it, sort of like a spiritual parachute or scuba diver's air tank. Faith is more like the air or the ocean where the divers do their thing. This woman, or at least Elisha, had faith for the boy to be born but then she needed faith to raise her son. She learned the truth of what was written many hundreds of years later by Paul: "In all my prayers for all of you, I always pray with joy because of your partnership in the gospel from the first day until now being confident of this, that he who began a good work in you will carry it on to completion until the day of Christ Jesus" (Philippians 1:4-6, emphasis added).

What have you started in faith but will need to end in it as well? Did you start a business but are now facing hard times? Did you launch a ministry only to find the world was not waiting for you to appear? Are you raising children who at this point in time don't seem to be interested in a Christian walk? Or, like the woman, are you waiting for the "other shoe to drop," expecting something bad to happen because something good already did? Whatever you are facing, you will have to man or woman up to it in faith. Faith has to be the air you breathe and not a pill you take. I urge you this week to examine your faith walk and confidence in the Lord to see if God is testing it to show it sufficient or inadequate. Then decide that what you will go all the way in faith with what started in faith, despite what the circumstances seem to be saying at this point in time. Have a blessed week.