The last two weeks, we have looked at stories that involved the Shunammite woman, her son, and their relationship with the 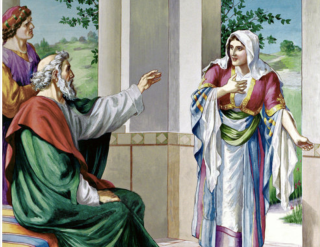 prophet Elisha. Believe it or not, we're not done with them all yet, for the woman provides another important lesson of how to unlock the power of your faith. The story begins with the prophet offering the woman a suggestion:

Now Elisha had said to the woman whose son he had restored to life, “Go away with your family and stay for a while wherever you can, because the Lord has decreed a famine in the land that will last seven years.” The woman proceeded to do as the man of God said. She and her family went away and stayed in the land of the Philistines seven years (2 Kings 8:1-2).

This is reminiscent of a situation in Abram's life as described in Genesis 12:10: "Now there was a famine in the land, and Abram went down to Egypt to live there for a while because the famine was severe." Even though Abram had traveled far at God's direction and had God promise him that the land he was on was his, he still had to leave his God-given land because of the famine. Just because God gives you something in faith doesn't mean you won't have to face struggles to obtain and maintain it. We don't know how long Abram was going but we read, "At the end of the seven years she came back from the land of the Philistines and went to appeal to the king for her house and land" (2 Kings 8:3).

It's obvious that either the king was holding her land for her, not sure if she was ever coming back, or he had actually made it part of his own land holdings, which in modern lingo would be known as a land grab. Jesus warned us that we have an enemy who likes to carry out his own land grabs as he seeks to "steal and kill and destroy" (John 10:10). Not only had the enemy tried to steal this woman's son through death, but then he also tried to take her land, her son's inheritance. In the fullness of time, however, she came back and went directly to the king to request the return of her land. Notice that she did not go to the prophet this time with her problem but went directly to the king, choosing to speak for herself. Her faith was such that she did not doubt God as she had on two previous situations that involved the birth and death of her son. This time she was confident and her confidence was rewarded.

The woman did not have to plead and beg to get back what belonged to her. She just needed to show up before the king. When she did, we read that God had already been working on her behalf:

The king was talking to Gehazi, the servant of the man of God, and had said, “Tell me about all the great things Elisha has done.” Just as Gehazi was telling the king how Elisha had restored the dead to life, the woman whose son Elisha had brought back to life came to appeal to the king for her house and land. Gehazi said, “This is the woman, my lord the king, and this is her son whom Elisha restored to life.” The king asked the woman about it, and she told him (2 Kings 8:4-6a).

What a coincidence, or so some would think—but we know better. The Lord had already rewarded the woman's faith by setting up the scenario to return her land. Whatever the king's motive for having her land, he could not ignore the timing of the moment: "Then he assigned an official to her case and said to him, 'Give back everything that belonged to her, including all the income from her land from the day she left the country until now'” (2 Kings 8:6b). This is similar to the promise made in Joel 2:25: "I will repay you for the years the locusts have eaten—the great locust and the young locust, the other locusts and the locust swarm—my great army that I sent among you." it seems that the Lord tested this woman one more time to see where her faith was and she passed with a high grade, and God met her more than halfway to meet her need. He restored what she had lost during her seven year absence.

In what area of life has the enemy tried to steal something from you? Where has the circumstances caused you to retreat from something the Lord promised or gave you? What has been your response? If you want to unlock the power of your faith, you must keep these things in mind:

If you can think of anything else to add to this list, feel free to add it to this entry where it is posted and wherever you are in your faith walk, have a blessed week!