As we move on in our study of how to unlock the power of our faith, we revisit the prophet Elisha who on his deathbed. The 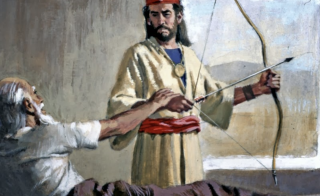 king of Israel visited to honor the dying prophet but in all probability also to seek his help in Israel's struggle against the armies of Aram. Elisha was only too glad to oblige but the king's response to Elisha's directions was not an adequate faith response to assure victory as we will see in this week's lesson.

Here is how the story begins:

Now Elisha had been suffering from the illness from which he died. Jehoash king of Israel went down to see him and wept over him. “My father! My father!” he cried. “The chariots and horsemen of Israel!” Elisha said, “Get a bow and some arrows,” and he did so. “Take the bow in your hands,” he said to the king of Israel. When he had taken it, Elisha put his hands on the king’s hands. “Open the east window,” he said, and he opened it. “Shoot!” Elisha said, and he shot. “The Lord’s arrow of victory, the arrow of victory over Aram!” Elisha declared. “You will completely destroy the Arameans at Aphek" (2 Kings 13:14-17).

That was certainly good news in the mind of the king. Let's look more closely at some of the details of this story.

Perhaps you have an open window of opportunity on your job, in your ministry, or in your personal expression of purpose or creativity. God has promised you success but now it's up to you to follow through and demonstrate your confidence in God's promise. That is what the king was expected to do but, as you will read, he failed to do do.

Your most vulnerable time where faith is concerned is right after you have gained a faith testimony. You trusted the Lord, He provided, but now you are hesitant to ask for too much for fear of going too far. Therefore you shrink back not wanting to appear greedy or too aggressive. You miss the chance to unlock the full power in your faith because you are afraid, or slow to respond, or fearful of what others (or the Lord) might think or say. This is perhaps what happened to the king:

Then he said, “Take the arrows,” and the king took them. Elisha told him, “Strike the ground.” He struck it three times and stopped. The man of God was angry with him and said, “You should have struck the ground five or six times; then you would have defeated Aram and completely destroyed it. But now you will defeat it only three times" (2 Kings 13:18-19).

Perhaps the king thought shooting the arrows was a symbolic act void of any meaning, but he was wrong. When the prophet said "strike the ground," he should have shot arrows and kept on shooting. He stopped short and therefore his victories would also be cut short of those necessary to totally defeat his foes. If you are going to enjoy faith victories, being fearless and bold in the exercise of your faith are crucial. I have written 73 books and my goal is to reach 100. I have published 65 books through my publishing company and my goal is to finish 500 before I expire (or can't work any longer). I want to keep striking the ground in faith and will only stop when I am told to stop--or don't have the strength to write or edit.

Where do you have an open window of opportunity? Where is God asking you to shoot arrows into the air with no specific purpose except to say, "I trust You, Lord, and Your faith process"? Are you afraid to ask for too much even though God has not indicated you are? Where do you need to remember the "chariots of Israel" that have showed up for you again and again to help and encourage you? If you want to unlock the power of your faith, then it's time to act like that power has already been activated as you shoot your faith arrows in the direction of your greatest opportunity. Have a blessed week!