It is interesting that of all the names mentioned in the Hebrews 11 chapter of faith, Joshua is not mentioned. However, the 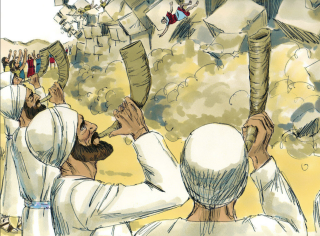 event he is best known for is when we read, "By faith the walls of Jericho fell, after the army had marched around them for seven days" (Hebrews 11:30). Let's look at the story and then next week we will look at my theory as to why Joshua is not mentioned by name—but that can wait until after we look at how the walls came a tumblin' down.

We read in Joshua 6, "Now the gates of Jericho were securely barred because of the Israelites. No one went out and no one came in. Then the Lord said to Joshua, 'See, I have delivered Jericho into your hands, along with its king and its fighting men'" (6:1-2). The Lord did not say He would give Jericho to His people. He stated "I have delivered it." He spoke in the past tense as if it was already done even though the city was shut up and secure against the Israelites. Faith always takes the holder to the realm of the unseen from the seen. God was speaking about the state of Jericho as it would be as if it already was and He invited His people to participate in this sneak peek of a coming reality or vision.

When you read Hebrews 11, you can't help but notice that all the heroes of faith saw something invisible when they believed. That is an example of vision, which is "something invisible made manifest to the senses." God is able to pull back the curtain of time and show His people something behind the curtain that He sees and when they see it too, it is as good as done. They were not going to conquer Jericho; it was already conquered and theirs. That's is how the power of your faith is unlocked--you see it .

Because the city was already conquered, God gave His people a faith strategy that would bring the walls down in such a way that no one, not Joshua or any of his warriors, could take credit for the victory. it occurred because of God and God alone. Yet the people still had to do something to make it happen, which is consistent with the principle that faith requires some kind of action.

If you are not doing something about what you believe, then you have to question if it's faith. If you believe God wants you to have a new car or home, are you out looking and shopping to find one, even if you don't yet have the means to purchase or rent? If God has called you to ministry, are you in school to learn or preparing sermons to deliver to no one in particular? If God has promised you a life partner but no one is "in sight," are you seeing yourself married, preparing for that eventual reality that is already accomplished in the mind of God? If you sense a missions trip is in your future. are you reading and learning about the language and culture of other countries? Part of the power in your faith is its ability to get you moving and we all know it is easier to steer a moving car than a parked one. The same is true for God "steering" one of His faith-filled children.

Joshua led the people around the city 13 times in seven days and then we read, "When the trumpets sounded, the army shouted, and at the sound of the trumpet, when the men gave a loud shout, the wall collapsed; so everyone charged straight in, and they took the city" (Joshua 6:20). The people marched in silence, blew trumpets and shouted, and the walls came down as God had promised. What is your faith strategy for the promise God has given you? Are you sitting and waiting, or are you thanking and marching?

This week, take the time to read either the Jericho story in Joshua 6 or the faith chapter in Hebrews 11—or both. Take your time and when you find something of interest, drill down a bit deeper to determine what God wants to show you. That study can also be your action resulting from your faith that God wants to teach you something fresh and new. The point this week is that you need a faith strategy that will spur you to act on the vision you have seen because you have put your trust in God. Have a blessed week!