Memo 1018: When the Brook Stops Running

As we conclude the series on unlocking your faith, let's revisit a story we looked at previously and that is the woman who was out 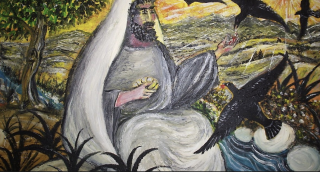 scrounging around for some sticks so she could go home, cook her last meal with what little she had left, and die. Elijah told her to feed him also and promised if she did, her jug of oil or jar of flour would never be empty. That is exactly what happened but this week, let's go back and learn what Elijah was up to before he came to visit the woman.

A BROOK AND A BIRD

Before Elijah came to the woman, he had experienced his own dire situation:

Now Elijah the Tishbite, from Tishbe in Gilead, said to Ahab, “As the Lord, the God of Israel, lives, whom I serve, there will be neither dew nor rain in the next few years except at my word." Then the word of the Lord came to Elijah: “Leave here, turn eastward and hide in the Kerith Ravine, east of the Jordan. You will drink from the brook, and I have directed the ravens to supply you with food there.” So he did what the Lord had told him. He went to the Kerith Ravine, east of the Jordan, and stayed there. The ravens brought him bread and meat in the morning and bread and meat in the evening, and he drank from the brook (1 Kings 17:1-6).

There are so many lessons to consider from this story. Here are just a few to consider:

I would imagine Elijah got quite used to this arrangement (although I doubt there was much variety in his diet during that time). He was probably in hiding for almost two years for when he emerged, the drought had caused a state of emergency in the land. Yet his time of hiding finally ended and then it was time for him to move on. How did he know that? He knew because the creek stopped running and the birds stopped coming:

Some time later the brook dried up because there had been no rain in the land. Then the word of the Lord came to him. “Go at once to Zarephath in the region of Sidon and stay there. I have directed a widow there to supply you with food" (1 Kings 17:7-9).

TIME TO MOVE ON

What did God use to indicate it was time for Elijah to move on? He used the basic circumstances of life so Elijah would know for sure it was God's will. Elijah could have waited, not wanting to get ahead of the Lord. He could have prayed that the brook and birds resume their daily care duties. Instead, Elijah obeyed and moved on because the lessons he had learned about God's ability to provide needed to be shared with someone else—the someone else being the widow. Elijah could trust the Lord for the woman's provision because he had had learned how to trust for his own because he had seen God's faithfulness firsthand.

Has your brook stopped running or your delivery birds stopped coming? Are you holding out for God to provide as He has or are you open to Him doing something new? The writer of Hebrews stated it this way:

"Therefore we also, since we are surrounded by so great a cloud of witnesses, let us lay aside every weight, and the sin which so easily ensnares us, and let us run with endurance the race that is set before us, looking unto Jesus, the author [originator] and finisher [perfecter] of our faith" (Hebrews 12:1-2, NKJV).

It's time for you to move on in your faith, which can never be static or complacent. Jesus is your Faith Agent and He oversees your faith growth and maturity as you learn what it means to walk by faith. There are days He feeds you by the brook and there are days He provides through the widow, but regardless of the means, He is your Provider and you can trust in the One who stops the rain and dries up the brook to fulfill His promises to you. And once you have done so, He wants you to go encourage others who are just learning that lesson. Have a blessed week!