You are probably familiar with the story of Jesus' encounter with the woman at the well as told in John 4. You may want to read the story again before you proceed with this Memo, for we are going to talk about how you can find and benefit from the living waters that Jesus mentioned to the woman in the story. Once you have read John 4, then come back to read what I have to say. 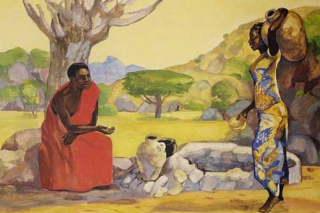 which Jews and Samaritans should worship. Jesus was trying to teach her that worship was not about geography but rather about a person, specifically His person. They went back and forth talking about worship and water, and then Jesus made an offer that intrigued the woman:

The woman decided to take Jesus up on His offer and responded, “Sir, give me this water so that I won’t get thirsty and have to keep coming here to draw water" (John 4:15). What I had never noticed was how Jesus fulfilled her request through His next comment. He basically said to her, "You want this water? Are you sure you want this water? If you want this water, then go get your husband" (a paraphrase of John 4:16).

What was the water Jesus was offering? It was an honest relationship with God where the woman could acknowledge her sins and when she did, she would then receive the living water of a relationship with Jesus. Up to that point in their conversation, the woman had wanted to talk about religious things, thinking that was what God would want from her. Instead, Jesus confronted her with her sins of the past and present, and that was the water He promised to give her and others like her: honesty and forgiveness.

If you want that same living water, you must come to God as you are, not as you think He wants you to be or who you are pretending to be. This woman was trying to present herself as a source of theological insight instead of the mess that she truly was. When she confronted her mess, it did not disqualify her from having a relationship with God; it actually qualified her. Her source of life was not in the correct mountain for worship, but an open and honest relationship with God.

When the woman understood that, she went home and got as many people as she could find to come and meet Jesus. She did not take them to the mountain; she took them to the Maker of the mountain who had "told me everything I ever did" (John 4:39b). She saw her connection to God was honesty, not correct doctrine. Her honesty led her to the correct doctrine in the person of her Forgiver and Savior.

Where are you telling God what you think He wants to hear? What religious debate have you entered into that is not a source of life? This woman found her purpose (to evangelize) when she faced the reality of who she was, then who God was (and is). The key to finding your purpose may be the same way, for living water is not found in a place (a mountain or a well) but through honesty with God. Have a blessed week!