I often ask audiences, "Who is the most charismatic king in the Old Testament?" By that, I mean who had the most miraculous and 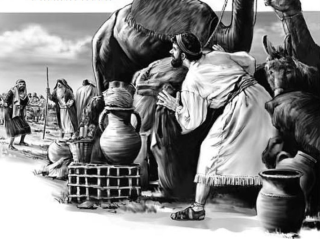 unusual spiritual confirmation of his call to leadership? Most people answer David but that is not the answer I am looking for. The answer is actually David's father-in-law, King Saul. We first meet Saul when he was looking for his family's donkeys and connects with the prophet Samuel (see 1 Samuel 9). From that encounter, we read of a number of supernatural events and confirmations, all indicating that Saul was to become Israel's requested leader. Let's spend a few weeks examining some stories in Saul's life to help us learn what to do and not to do when God chooses us to fulfill His and our assigned purpose.

We won't look at all the stories leading up to Saul's coronation, but there is one aspect of his story that stands out. After Saul met Samuel and after many unusual spiritual events took place to indicate Saul was to be the king, he returned home. Then we read,

Now Saul’s uncle asked him and his servant, “Where have you been?” “Looking for the donkeys,” he said. “But when we saw they were not to be found, we went to Samuel.” Saul’s uncle said, “Tell me what Samuel said to you.” Saul replied, “He assured us that the donkeys had been found.” But he did not tell his uncle what Samuel had said about the kingship (1 Samuel 10:14-16).

I find it unusual that after Saul met the most famous prophet in Israel and after he had been confronted with the fact that he was to be king and after God had "changed his heart" and after Saul prophesied with the prophets, he had no testimony. He had nothing to say. When his uncle in essence asked him, "What's up with you?" Saul did not report any of those events to his uncle. I find that odd. I would have told anyone who asked what God was doing in my life and that I was about to be king. Yet Saul said nothing. Could it have been humility? Perhaps. Or could it have been disinterest and reluctance to take the high position God had given him? His next actions answer this question.

HIDING IN THE BAGGAGE

When Samuel had all Israel come forward by tribes, the tribe of Benjamin was taken by lot. Then he brought forward the tribe of Benjamin, clan by clan, and Matri’s clan was taken. Finally Saul son of Kish was taken. But when they looked for him, he was not to be found. So they inquired further of the Lord, “Has the man come here yet?” And the Lord said, “Yes, he has hidden himself among the supplies.” They ran and brought him out, and as he stood among the people he was a head taller than any of the others. Samuel said to all the people, “Do you see the man the Lord has chosen? There is no one like him among all the people.” Then the people shouted, “Long live the king!” (1 Samuel 10:20-24).

When Saul's big day came, he hid himself and no one knew where he was—except the Lord who "ratted" him out. The people didn't seem to mind, so they went to where Saul was and brought him to his own party where he was the guest of honor. Saul stood "head and shoulders" above his people, but he didn't stand to the height got had given him. Instead, he tried to shrink so he would be invisible. Perhaps he was afraid or maybe he just didn't want the job God had given him. Whatever it was, he went hiding among his baggage, assuming he was safe from the long arm of the Lord.

How about you? Are you hiding in the baggage of your life? Perhaps it's your past, fearful or maybe even relieved that your past disqualifies you (or so you think) from the call God has on your life. Are you hiding in your emotional baggage, excusing yourself because of your tender, weakened, or wounded condition? Maybe it's the baggage of all your responsibilities, convinced that your job, family responsibilities, financial instability, or age (young or old) preclude your involvement in anything beyond your current duties? Have you actually piled up a lot of baggage, maybe even subconsciously, to bolster your fear that you are inadequate and prevent your taking on more duties?

The good news of course is that God is more than adequate and His grace may even come find you in the baggage car of your life train. The problem is that if you don't go willingly and allow God to change you, you will continue to sabotage your own success along the way just like King Saul did. Perhaps you simply need to surrender like Jesus' mother did when she told the angel after she asked how she could possibly be pregnant: "'I am the Lord’s servant,' Mary answered. 'May your word to me be fulfilled'" (Luke 1:38). This week, ask God to show you if you are hiding in your baggage, and then give Him permission to bring you out so you can attend your own coronation as He installs you as His representative before a few or many to fulfill your purpose and express your creativity. Have a blessed week!