We started to look at King Saul's life last week, beginning with his attempt to hide on his coronation day. This act represented a 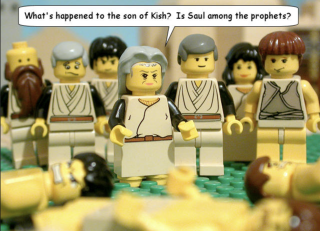 cowardly reluctance on his part to accept God's clearly revealed purpose for his life, which is all the more surprising when we learn what happened right before Saul went into hiding:

When he and his servant arrived at Gibeah, a procession of prophets met him; the Spirit of God came powerfully upon him, and he joined in their prophesying. When all those who had formerly known him saw him prophesying with the prophets, they asked each other, “What is this that has happened to the son of Kish? Is Saul also among the prophets?” (1 Samuel 10:10-11).

The Spirit had such a strong presence in Saul's life that he began to prophesy, which seems like a bizarre manifestation until we give it more thought and put it into a full biblical context. Let's spend some time doing that in this week's Memo.

There are many interpretations of prophecy and some even argue whether or not it is a practice still relevant for and active in the church today. For the sake of our discussion, I am going to assume that it is relevant and then define prophecy as "understanding what God is saying or doing, and then helping others comprehend the implications of that for their lives." I know it's simplistic but bear with me for now. For example, I began teaching and speaking on finding one's God-assigned purpose in 1991. In a sense, that was a prophecy to those who heard me and accepted the veracity of what I was teaching. It was a "word from the Lord" and after that I devoted myself to helping listeners be clear as to their purpose, its implications, and a resulting action plan.

If we accept my definition, then Saul had insight from the Spirit as to what God was doing among His people by appointing Saul. Saul was their king but God was their ultimate ruler with Saul serving under His oversight and direction. However, even though Saul had a powerful encounter with the Spirit, he was not interested in helping God's people. He fell back into a selfish, self-centered perspective that at first tried to avoid the power of leadership but ultimately found him clinging to his power and position long after God had said, "Enough!" We may shake our heads when we read that Saul rejected God's purpose, which included serving others with the power God gave him, but let's be careful not to point an accusing finger at him while we do the same.

Lest you be confused, prophecy is a noun and prophesy is a verb, the action which produces a prophecy. Many centuries later, Paul had this to say to the Corinthian church about prophecy and the need to prophesy:

However you choose to define prophecy, Paul wrote that we should be "eager" to do so. What exactly should we be eager to do? We should be eager to say something that will build up others. That means we should be looking for ways to share what we see, what we know, and who we are with others for their benefit. Today, most churches do not have a time for people to share what they are learning from the Lord, which is why small groups and social media are so important. It is in those settings that we can let the Spirit flow through us to others. It is possible, however, to have the same attitude Saul had that did not look for how his spiritual encounters could be used to benefit others.

As I close, I ask you one question: Are you eager to prophesy? If you are, then you are actively looking to speak for the benefit of others, not acting like you are insignificant, fearful to "get ahead of the Lord" by saying or doing too much. Are you using your life as a model and example for others to follow? That means you have to sharing your life, not hiding in a privacy cave of your own making. How can you do too much to help other people? How can you express too much purpose if it is indeed God's will for your life?

The bottom line is Saul was not eager to prophesy or do anything else for that matter that would benefit anyone else. He protected himself and his privacy even though God had clearly revealed He wanted to use him to lead. Don't fall into that mindset of being nonchalant toward the things God shows you, but rather be active in seeking a platform where God can speak through you, prophesy through you even, for the good and edification of others. Have a blessed week!