We have looked at King Saul the last few weeks but this week I want to look at one of his descendants by the same name, which is the 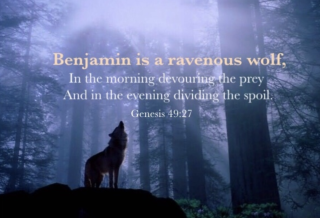 man we know as the Apostle Paul. King Saul was of the tribe of Benjamin, the same tribe as the apostle. It's interesting that Paul's parents gave their son the name Saul despite Saul's reputation as a king. Obviously they identified closely with their heritage and thus overlooked the negative connotations. Paul himself wrote, "I say then, Has God cast away his people? God forbid. For I also am an Israelite, of the seed of Abraham, of the tribe of Benjamin" (Romans 11:1). What was it about Benjamin that made Paul's family so proud of its legacy? Let's try to determine that and the lessons for us in this week's Memo.

Benjamin was the second son born to Jacob and his beloved wife Rachel. He was the youngest of all Jacob's sons and full brother to Joseph, whose longing to see him was an important part of Joseph's drama with his brothers when they met in Egypt. Much later in Israel's history, when the ten tribes rebelled against Solomon's son, it is reported, "When Rehoboam arrived in Jerusalem, he mustered Judah and Benjamin—a hundred and eighty thousand able young men—to go to war against Israel and to regain the kingdom for Rehoboam" (1 2 Chronicles 11:1). Only Judah and Benjamin had remained loyal to David's throne while the other ten tribes broke off to form Israel.

Now consider the effort it took for the apostle's family to be able to trace their heritage with certainty back to Benjamin, for there had been wars, upheaval, exiles, and more wars in the centuries between them and Benjamin's life. Yet the tribal historians worked diligently to identify and protect the family trees and lineage associated with their people. Also, there was an important prophecy given to Benjamin of which the family was aware. It would seem that this word was fulfilled centuries later in the life of the apostle which superseded all ethnic origins or identity and became the purpose compass the apostle followed.

When Jacob was on his deathbed, he prayed for and prophesied over each of his sons, saying this about his son Benjamin: "Benjamin is a ravenous wolf; in the morning he devours the prey, in the evening he divides the plunder" (Genesis 49:27). That is an odd word to give the head of a tribe but could it have been Jacob looking forward to see the purpose of Benjamin's descendant, Paul, who had the greatest impact on the early church next to Jesus? Paul was indeed a ravenous "wolf," devouring Scripture, learning the ways of his people, and staying true to his tribal heritage. Yet when Jesus apprehended Saul for his purpose, Saul adjusted his tribal name from Saul to Paul to divide the spoils of his revelation and purpose with the Gentiles. He became ravenous for Jesus and wrote this about his past:

If someone else thinks they have reasons to put confidence in the flesh, I have more: circumcised on the eighth day, of the people of Israel, of the tribe of Benjamin, a Hebrew of Hebrews; in regard to the law, a Pharisee; as for zeal, persecuting the church; as for righteousness based on the law, faultless. But whatever were gains to me I now consider loss for the sake of Christ. What is more, I consider everything a loss because of the surpassing worth of knowing Christ Jesus my Lord, for whose sake I have lost all things. I consider them garbage, that I may gain Christ and be found in him (Philippians 3:4-9).

The point is that Saul had a purpose in Christ and the magnificence of his heritage or his family's standing or his name could not be allowed to interfere with his purpose of being a wolf for Christ—finding and dividing the spoils of revelation and purpose for and with God's Gentile people. And the same is true for you. You cannot allow your ethnicity, race, denominational history, political affiliations, family ties, birth order, family business, family expectations, or family traditions to interfere with the will of God for your life. Perhaps this is why Jesus stated it so strongly: "If anyone comes to me and does not hate father and mother, wife and children, brothers and sisters—yes, even their own life—such a person cannot be my disciple" (Luke 14:26).

What's more, as we just learned, God had identified the apostle's purpose long before he was born as spoken through Jacob and the same is true for you. He has assigned your purpose before the foundation of the world. Now it's your job to see that nothing interferes with this most sacred task that has been entrusted to you to fulfill as no one in the history of the world has been able to do quite like you. Have a blessed week!