I love to read anything about the Apostle Paul because he was such a man of purpose. Far from perfect, Paul was difficult to work 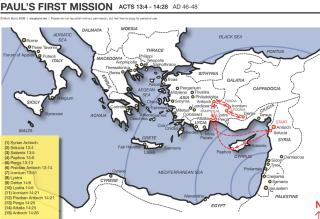 with and had little patience for underachievers. Next to Jesus, however, no one played a greater role in the development of the early church than Paul. He was able to do so not because he was smart (although he was) or aggressive (although he was), but because he was a man of purpose. When he went to the Gentiles, God went with him and the results were spectacular. One year I read a great book entitled Paul: The Traveler and Roman Citizen by William Ramsey.

In it, I read once again about Paul’s first missionary journey to Cyprus and the Galatian region as described in Acts 13. When Paul confronted a magician who was trying to hinder his work, Luke (the writer of Acts) stated, “Then Saul, who was also called Paul . . .” (Acts 13:9). What a simple but profound statement. It would have been about 14 years since Saul had his dramatic encounter with Jesus on the Damascus road.

After all that time, he stepped on to the Galatian mission field and said, “My name is no longer Saul but Paul. That is how I will be known from now on. That is how I will sign my name, even when I am among my own Jewish people.” It took Paul 14 years to realize who he was and what he was created to do, and when he did, he changed his name to Paul. Think about the significance of this decision. By his own admission, Saul was a Jews' Jew:

If someone else thinks they have reasons to put confidence in the flesh, I have more: circumcised on the eighth day, of the people of Israel, of the tribe of Benjamin, a Hebrew of Hebrews; in regard to the law, a Pharisee; as for zeal, persecuting the church; as for righteousness based on the law, faultless (Philippians 3:4-6).

Saul was so zealous for his people that he spent time hunting down and persecuting Jews who professed faith in Christ as the Messiah, until God apprehended him on the Damascus Road. However, his Jewish heritage was not all there was to Saul.

Saul was a Roman citizen from the cross-cultural city of Tarsus. He knew four languages (Hebrews, Aramaic, Greek, and Latin). Saul understood the Roman/Greek world of his day, and he was in some ways more comfortable in the Gentile world than he was in Jerusalem. Saul had legal rights as a Roman citizen, rights that even Jesus did not have when He faced His accusers. Saul was a Roman! through and through In Cyprus, Saul stepped forward into his purpose and from that point, he was known and is still known today as Paul and not Saul. What a difference a one-letter change made in world history.

That is the power of purpose. Nothing changed in Saul’s life except how he saw and then labeled himself. The only thing that changed was his mind and thinking, but that was enough to have him boldly declare, “This is who I am. I am doing what I was created to do and be among the people who I was designated to impact and reach.” From that point, his travels, his letters and  legacy have shaped the world and the Church for 2,000 years.

Who are you? What is your “name?” Are you ready to step forward and acknowledge who you are and what your past has shaped and prepared you to be today? Are you prepared to stop identifying with what others call you and make a statement of purpose for yourself? This could be the week when you have your debut out of the shadows of who you have been into the light of who God wants you to be. The world is waiting for the real you to emerge. As you unveil the true you, I hope you have a great week!