Last week, we saw how Joshua prepared the people to enter the Promised Land. Then in chapter two, he sent out two spies to "look 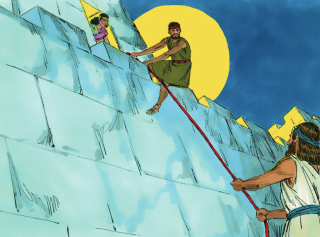 over the land." Those spies came to the house of Rahab who not only gave them shelter but also protected them from the local authorities who were looking to take them into custody. There are many interesting aspects of this story. We can look at it from the perspective of Rahab who "cut a deal" with the men to save herself and her family. We could look at the fact that Rahab is mentioned in Jesus' family tree (see Matthew 1:5), all because she tied a scarlet cord in her window and all Israel knew to spare those who were in that house. Yet I thought I would look at this story from the perspective of the spies as we examine their faith and boldness in this week's Monday Memo.

Joshua handpicked these two spies, obviously being confident in their skills and trustworthiness. It would seem they had to put their lives on the line to carry out their mission, for their enemies would certainly have killed them if they found them. So the spies had courage but they were also resourceful. However, the king of Jericho seemed to have full knowledge of their mission and whereabouts and it took the courage of Rahab that matched their own courage to save their lives.

Think of Rahab's courage for a moment. She risked her life and those of her family to conceal the spies. She stood against her own people because she had a revelation, for she knew who the spies were and what their mission was. How did she know? She knew because God had revealed it to her. Even though she lied and deceived, she did it in faith and her faith was rewarded with "salvation." And in a sense, the spies' faith was rewarded for they chose the correct house owned by a faith-filled women of dubious moral character who saved their lives and preserved their mission.

The aspect of the story I want especially to focus on was the deal that the spies made with Rahab. They could not check back with Joshua in headquarters to get the deal approved. They really didn't even know if Rahab was telling the truth. What if she was lying or changed her mind and revealed their whereabouts or destination after she helped them escape down the wall? These spies had faith and then Joshua and the nation honored their deal by sparing Rahab, as long as she kept her end of it through the scarlet cord.

This deal made me think of what Jesus said: "Truly I tell you, whatever you bind on earth will be bound in heaven, and whatever you loose on earth will be loosed in heaven. Again, truly I tell you that if two of you on earth agree about anything they ask for, it will be done for them by my Father in heaven. For where two or three gather in my name, there am I with them" (Matthew 18:18-19). The spies had leeway and authority to strike a deal and it saved an entire household and impacted Israel for generations to come.

My point in all this is that we have the same authority the spies did. We are to venture out to see what the Lord is doing and when we find faith, we are to offer salvation to the people who respond. Jesus told His disciples not to waste time with those who did not receive their message (like the king of Jericho) and devote their efforts to those who were open and responsive (like Rahab). Then when they found such people, they were to loose heaven's blessings on them and heaven was duty bound to respond to their efforts.

Neither the Lord nor Joshua told the spies what to do where Rahab was concerned. They discerned the situation and acted in faith. God wants you to do the same. Where can you take the initiative to extend God's kingdom, not worrying if you are overstepping your boundaries but confident God is with you as you go? How far are you willing to travel to find a Rahab to whom God has spoken and is ready to respond in faith? I encourage you to be a good spy for God and realize that as you go, you are going on His behalf and He is watching and waiting to see what good deals you can make that will bless those with whom you make them. Have a blessed week!