This week I present a New Year's Memo from the archives about the Magi. I will resume writing fresh Memos next week, but 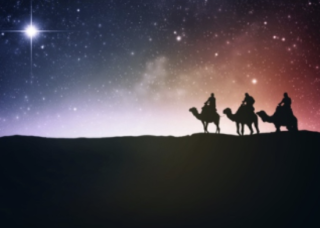 in the meantime, Happy New Year!

WHO WERE THOSE MEN?

Who were those wise men known as Magi who came from the east to visit Jesus and bring him gifts? (You can read this brief story by at Matthew 2:1-12.) We aren't really sure. We also don't know what they were looking for as they studied the heavens and what kind of star they saw that caused them to follow it hundreds of miles to find an infant king.

There were probably more than three men who came to see Jesus, but we have numbered them as three since they brought three gifts of myrrh, incense, and gold. They rode on camels for days, weeks even, not sure of what they would find when they arrived. Now that's faith! When they did arrive, they checked in with King Herod, convinced that he would know where the royal infant was. It is interesting that the wise men knew more of what was going on spiritually in Herod's kingdom than Herod did.

By the time the Magi arrived, Joseph, Mary, and Jesus were living in a house, not in a stable. The men came some time after the night the shepherds went to see Jesus in the manger. Since Herod carefully ascertained when the star had first appeared and then had all the male babies two years of age and under killed in Bethlehem, the Magi could have arrived as much as two years after Jesus' birth. That's a long time to watch and follow a star.

You will need God's help if you are to find and fulfill your purpose. That's not a problem, however, for God is in the business of helping people like you clarify your purpose. When Jesus was born, His star appeared and led those who were interested directly to his home. The same thing can happen today for you. God can lead and guide you right where you need to be at exactly the time when you need to be there. Often when you can't see your purpose, you aren't quite ready to find it. Yet if you keep searching and following just like the Magi did, your star will appear and suddenly your PurposeQuest will make sense.

As we prepare to celebrate a new year, I urge you to follow in the footsteps of the Magi. Wise men and women still seek Jesus and, as they do, they find purpose. I pray that 2019 will be a year of purpose and productivity the likes of which you have never seen, imagined or enjoyed. I also pray that when you find the star and follow it, you will end up where the Magi did—worshiping the King and giving Him gifts. There is no greater gift than devoting and dedicating the fulfillment of your purpose to Christ and His kingdom. That is what I plan on doing in the year ahead.

From all the Stanko household, we wish you a very happy, prosperous and purposeful New Year!