We are in the homestretch with our series on how to unlock the power of your thinking with only four more entries after this one. 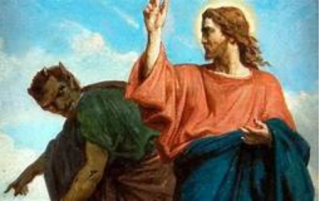 Many of our lessons have come from Jesus' encounters with His disciples as He confronted and corrected their incomplete or erroneous thoughts, replacing them with new ways to think and act. This week, let's look at another instance of Jesus with His disciples, this time involving Peter in their well-known discussion that shocks us each time we read it.

In Matthew 16, Jesus had taken His disciples far north of Galilee where they could spend some alone time without the crowds or spies sent from Jerusalem. While there, He asked them who He was in the eyes of the public but then asked them who they thought He was. Peter then gave His answer based on the Father's revelation that Jesus was "the Messiah, the Son of the living God" (Matthew 16:16). Jesus ordered the men not to tell anyone what Peter had just told them, and went on to the next level of their training so He could prepare them for what was ahead: "From that time on Jesus began to explain to his disciples that he must go to Jerusalem and suffer many things at the hands of the elders, the chief priests and the teachers of the law, and that he must be killed and on the third day be raised to life" (Matthew 16:21).

When Peter heard this, He was concerned for his Messiah and himself, so he pulled Jesus aside and said, “Never, Lord! This shall never happen to you!” (Matthew 16:22), to which Jesus gave His stunning reply, “Get behind me, Satan! You are a stumbling block to me; you do not have in mind the concerns of God, but merely human concerns" (Matthew 16:22). Peter thought he was protecting Jesus, in essence saying, "Spare yourself, Lord. You don't have to do or go through that ordeal." Yet in his ignorance Peter had unwittingly become a spokesman for Satan and Jesus recognized it right away. If the story had ended there, we would not have the complete picture, one that gives us lessons to apply today as we seek to unlock the power of our own thinking.

THE REST OF THE STORY

Jesus turned to all the disciples after He rebuked Peter and continued,

“Whoever wants to be my disciple must deny themselves and take up their cross and follow me. For whoever wants to save their life will lose it, but whoever loses their life for me will find it. What good will it be for someone to gain the whole world, yet forfeit their soul? Or what can anyone give in exchange for their soul? For the Son of Man is going to come in his Father’s glory with his angels, and then he will reward each person according to what they have done" (Matthew 16:24-27).

There can be no new thinking unless the power and concept of the cross are part of the foundation. Peter was protecting himself as well as Jesus when he said what he did, but Jesus explained that there can be no success in carrying out the will of God without denying self, taking up a cross, and following Jesus. In my own life, the cross has manifested in many ways. We moved 11 times in 33 years to follow what we believed was God's will. I turned down admission to Harvard and Carnegie Mellon to pursue ministry. I have suffered at the hands of church people for 47 years (sometimes through my own failures, other times at the hands of mean-spirited people and leaders). I have had to sit in silence when others were teaching things and had little idea what they were saying. One time when I was a pastor I opened our refrigerator and all we had in it was a bottle of water and a box of corn flakes in the cupboard.

Today, I flow in purpose and creativity but it wasn't always like this. I tried to spare myself the agony of some of the death-to-self experiences (and there are plenty more I did not mention) but to no avail. I am still trying to learn how to do what Paul wrote in Colossians 3:2: "Set your minds on things above, not on earthly things." How about you? Where are you avoiding the cross? Where is the deny-self thinking not prevalent in your plans?

Remember, Peter went from divine revelation to divine consternation in a matter of minutes, so your past insight and success are no guarantee your current thinking is sanctified and correct. The only way you can ensure it is unlocked is to lock on to the truth that if you want to find your life, you will not be able to spare yourself from the tough times. You are going to have to lose your life along the way and trust that it will find you again no matter where you are or what you are doing—sort of like Thor's hammer in the Avengers. Have a blessed week!