I have not drawn much from the Old Testament in this Unlock the Power of Your Thinking series, but let's change that this week by 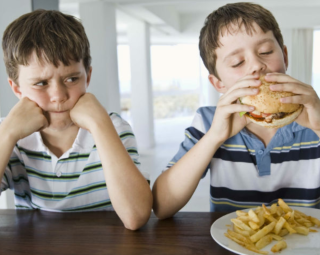 looking at one of the best-known and oft-quoted verses pertaining to one's thought life. It's found in Proverbs 23:7 and for our purposes, let's look at it in its context:

Do not eat the bread of a miser, nor desire his delicacies; for as he thinks in his heart, so is he. “Eat and drink!” he says to you, but his heart is not with you. The morsel you have eaten, you will vomit up, and waste your pleasant words (Proverbs 23:6-8 NKJV, emphasis added).

What we can learn about this verse and why Solomon penned it?

I have used this verse to corroborate the truth of what Jesus said, "But those things which proceed out of the mouth come from the heart, and they defile a man" (Matthew 15:18). Yet Proverbs 23:7 is not addressing the issues of the heart-and-mouth connection. It is talking about a man who appears to be generous and welcoming, but in reality is not. He's what's known as a miser so he is actually counting the cost of what he is giving others while pretending to be generous. He knows the value of what he is giving away and it is troubling him to share with you or anyone who partakes of what he has.

I had a friend who used to say, "People know the price of things but seldom consider the value of things." He used it when we would offer a seminar that had a registration fee. There were people who only looked at the price but did not consider that they could  receive great value from the seminar material; they were only looking at what it would cost them. It was interesting that those same people would often complain because their company would not invest in them but they would turn around and do exactly what their company was doing—not invest in themselves.

Instead of making the miser in Proverbs 23:7 someone else, let's examine it from the point of view that we—you and I—are that miser. If that's true, how would being like him impact our thinking and how could we then unlock that area to find new power in our thoughts?

When I was a church administrator, I used to encounter many miserly people. They would pay whatever the utility company said to pay, but wouldn't bless a staff member with a $50 gift certificate. When working with those people, I would often say, "It's not my money, it's the Lord's." When most people heard that, they assumed I meant what is usually intended: "We are frugal because God has given us this money and we are going to be careful, very careful how we spend it." That was not what I meant at all. My sense was this: "This is the Lord's money. What do I care if He wants us to give it to missionaries or someone on our staff or someone in the church who had a need or to something that could make life easier for our staff? If it's His money and He has plenty more where that came from, then why should I or we be tightfisted with it?"

You see, some of us feign generosity, but we sit like the miserly person in Proverbs 23 and we are nervous. We are nervous others are consuming what we want to hold on to, what we believe is ours to own. What's more, it's not about money really, it's about holding on to the testimony or gifts we have because it's going to cost us something—just like the miser. Jesus said, "Heal the sick, raise the dead, cleanse those who have leprosy, drive out demons. Freely you have received; freely give." (Matthew 10:8). What if that last phrase became your byline or motto for living? How would "freely received, freely give" change your thinking from where it is now? You would probably give more of yourself and that may or may not include money. Just as I said, "It's the Lord's money," it's also His testimony, His gift, His creativity, His life that you possess, not to own but to steward.

The problem with the phrase "as a man thinketh" is that it is potentially true for all of us, not just those we don't like or who don't do like we want them to. It is necessary for me to seek the Lord and inquire, "Where am I acting one way that makes people think I am in line with Your will, but in reality I am counting the cost and I don't like that it's costing me so much? Where am I being a miser with those around me and that is of no benefit to them or me?" Move across the table this week from the seat of the one eating to the miser and look at yourself from that perspective. Are you serving others a banquet of who you are and what you have, or are you pretending to do that a few hours a week, while secretly stashing away the best of who you are for your own consumption? If that's the case, then it's time to remind yourself that "it's not your money or life" and start thinking of how you can spread it and you around. Have a blessed week!