It's time to start another series, this one named Unlocking the Power of Your Faith. Faith is the fifth of five Gold Mine Principles I have taught over the years, the five being purpose, creativity, goal setting, time management, and faith. Without faith, the other four 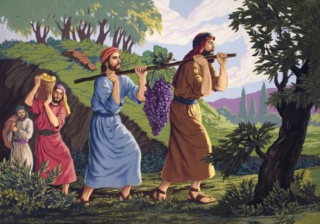 principles are just hard work. Faith mixed in adds joy and adventure and of course involves the most important component in all that we do and the element is God Himself. Eventually, this will become the sixth in my Unlocking book series, which includes Unlocking Purpose, Creativity, Productivity, You(r personality), and Thinking. Let's get started.

In Numbers 13, we read about the spies who Moses sent into the Promised Land as God directed him to do. It is interesting that Moses recorded each one of the men by name, so their mission is not only recorded for posterity, but also includes their role as well. When God sends you on an assignment, He is watching and knows your name. Moses commissioned the men and gave them the parameters of their task that included this twist: "Do your best to bring back some of the fruit of the land" (Numbers 13:20). Moses didn't want just a report, he wanted tangible evidence for all the people to see. The spies complied as we are told:

When they reached the Valley of Eshkol, they cut off a branch bearing a single cluster of grapes. Two of them carried it on a pole between them, along with some pomegranates and figs. That place was called the Valley of Eshkol because of the cluster of grapes the Israelites cut off there. At the end of forty days they returned from exploring the land (Numbers 13:23-25).

But that's not all the spies brought back with them. Unfortunately, they brought a bad report:

"We went into the land to which you sent us, and it does flow with milk and honey! Here is its fruit. But the people who live there are powerful, and the cities are fortified and very large. We even saw descendants of Anak there. The Amalekites live in the Negev; the Hittites, Jebusites and Amorites live in the hill country; and the Canaanites live near the sea and along the Jordan" (Numbers 13:27-29, emphasis added).

The spies knew the word of the Lord as it had come to them through Moses, but they had also seen with their eyes the reality of the Land to which God was sending them. That word but made all the difference in how they framed what they saw. When they had to vote for one or the other, they cast their lot with their but based what they saw.

Caleb tried to talk some faith sense into the people and their comrades by saying, “We should go up and take possession of the land, for we can certainly do it" (Numbers 13:30). However, the seeds of doubt had been planted and their fellows spies had a ready response;

“We can’t attack those people; they are stronger than we are.” And they spread among the Israelites a bad report about the land they had explored. They said, “The land we explored devours those living in it. All the people we saw there are of great size. We saw the Nephilim there (the descendants of Anak come from the Nephilim). We seemed like grasshoppers in our own eyes, and we looked the same to them" (Numbers 13:31b-33).

Of course, this story is recorded to teach and instruct us so we know how we should respond to the word of the Lord to us, and it is quite simple: If you want to unlock the power of your faith, there can be no buts. You cannot say, "Yes, this is what the Lord wants me to do but I am too old, but I am too young, but i don't have training, but I don't have the money, but my partner doesn't approve." Where has your but caused you to stop short in your faith journey? Where has your but prevented you from knowing the joy of faith fulfilled? Where has your but caused you to sit on a word from the Lord, content to roll it around in your spiritual mouth like a mint enjoying its flavor without deriving any spiritual growth from it? It's time to get off your but and be like Caleb who did not allow his but to deter him from having the faith that God could do what He had promised for His people. Have a blessed week.