I don't know about you, but A GPS has changed the way I drive and travel. (By the way, I didn't know GPS stands for global positioning system.) I don't have to call anyone for directions or print out a map. All I have to do is put in the address of my destination and in 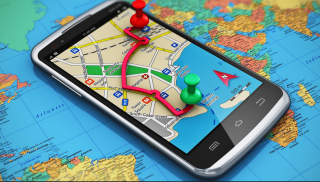 most cases I have instant directions of how to get from where I am to where I want to go. This week, let's look at Abraham, the father of those with faith, and see that he also had a GPS that gave him directions.

The writer of Hebrews tells us this about Abraham:

By faith Abraham, when called to go to a place he would later receive as his inheritance, obeyed and went, even though he did not know where he was going. By faith he made his home in the promised land like a stranger in a foreign country; he lived in tents, as did Isaac and Jacob, who were heirs with him of the same promise. For he was looking forward to the city with foundations, whose architect and builder is God (Hebrews 11:8-10).

How did Abraham know where to go and when he had arrived? He had a faith GPS in that God directed him. Yet his faith was not just to get him there, he had to live in faith once he arrived, making do in a tent like a stranger in a campground. However, he knew he was in the right place because God made it clear to him. In other words, God was his GPS. That sounds pretty basic and simple: The Lord led him where he needed to be. Yet was it?

Imagine leaving your homeland for good and not knowing what direction you were to go or where you were to stop (he was 75 years old at the time). Could you have that kind of faith that God would somehow lead you where you needed to be? And what was he do to do when he arrived? Abraham had to have faith every step of the way, but this was all training for the most important faith venture he would be required to take later when God directed him to go and sacrifice Isaac, his son of promise.

A LIFESTYLE, NOT AN EVENT

For Abraham, faith was not an event, it was a lifestyle. He left his home in faith, he lived in faith, he raised his son in faith, and he was prepared to sacrifice him in faith:

Some time later God tested Abraham. He said to him, “Abraham!” “Here I am,” he replied. Then God said, “Take your son, your only son, whom you love—Isaac—and go to the region of Moriah. Sacrifice him there as a burnt offering on a mountain I will show you" (Genesis 22:1-2).

Abraham could do this because faith was as natural as breathing oxygen. He had come that far by faith and he was prepared to go all the way, as God proved through this incident. Abraham could set out to find the mountain because he had done it before and God had led him to the right place. This time, he at least had a general idea where he was going (the region of Moriah) but then we are told, "On the third day Abraham looked up and saw the place in the distance" (Genesis 22:8). Because Abraham had faith, he saw what others could not see. Anyone else would have passed right by that mountain, but faith always gives you insight into the invisible—well, the invisible to the naked eye that is. The eyes of faith know what they are looking for or rather they know the One who will open their eyes to what they are looking for.

Eight years ago, I left behind a position at my church, surrendering 80% of my revenue, to start a publishing company. I had no money and some experience writing books but not publishing them. I set out from my place of comfort into the unknown, not sure what I would find and what I was looking for. Today, that publishing company carried me through the pandemic and has provided for a full-time and two part-time employees. My GPS, perhaps we should call it my God Positioning System, told me I was right where I needed to be in Him.

Are you lost, wandering around a maze of confusing professional or ministry opportunities? Are you fearful that your GPS is faulty thus causing you to miss your destination? Many years ago, I determined not to put my faith in my ability to hear the Lord but instead put it in His ability to speak to me. He can direct me through my confusion, doubt, missteps, and multiple options that seem attractive. He can do this even when I am not aware He is doing it and He can and will do the same for you. If you want to unlock the power of your faith, then you have to step out and move out into the great unknown, confident that your GPS is guiding your every step. Have a blessed week.