Memo 996: Calling on the Name of the Lord

Last week we began a study of Abraham in the context of my latest series Unlocking the Power of Your Faith. Abraham is considered the father of those with faith, so he is a good individual to study to gather faith lessons. In Memo 995, we learned that Abram left his homeland by faith, not knowing where exactly he was going. What he did along the way is the subject of this week's Memo.

AN ALTAR HERE, AN ALTAR THERE

As we study the earlier parts of Abram's life, we see that he used his creativity and expressed his faith by building an altar wherever he 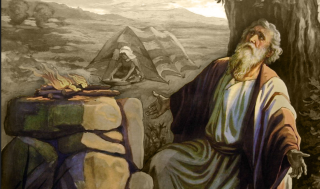 Abram was pursuing the purpose God had assigned him, but the way was hard and fraught with uncertainty and danger. Even his nephew and he eventually experienced conflict, which caused them to split, with Lot taking what appeared to be the best of the land when Abram allowed him to choose first. At a time when it appeared Abram had experienced great loss, the Lord appeared to him and renewed His promises:

The Lord said to Abram after Lot had parted from him, “Look around from where you are, to the north and south, to the east and west. All the land that you see I will give to you and your offspring forever. I will make your offspring like the dust of the earth, so that if anyone could count the dust, then your offspring could be counted. Go, walk through the length and breadth of the land, for I am giving it to you" (Genesis 13:14-17).

What was Abram's response after Lot left and Lord spoke to him? He built the altar described in Genesis 13:18, using his hands and creativity to worship the Lord and recommit his way to the God who was leading him.

CALLING ON THE NAME OF THE LORD

We are all familiar with one of the Ten Commandments, which states, “You shall not take the name of the Lord your God in vain, for the Lord will not hold him guiltless who takes his name in vain" (Exodus 20:7, ESV). We have typically taken this to mean that we are not to use certain terms of profanity with God's name in it. While that is inappropriate, that is not what the commandment intended. It means we are not to call ourselves the people of God and do nothing with the name that we use to identify ourselves. That fits in nicely with what James wrote, "So too, faith by itself, if it does not result in action, is dead." (James 2:17, Berean). If you wear God's name, if you use God's name, then you should do something in the power or authority of that name. Otherwise, you take that name in vain.

Abraham did what he could along his faith journey and one of those things was worship at the altars he built. Notice that he called upon the name of the Lord, which we are still commanded to do (with repercussions for those who refuse to do so):

This seems to fit in with what Jesus taught His own followers:

Are you building altars wherever you go and calling on the name of the Lord? Are you depending on and applying the power of the name where you go and in what you do? If you are going to unlock the power of your faith, you will have to follow in Abraham's steps and call on the name of the Lord, not in vain but with full expectation that He hears you and will provide what you ask that will help you bear fruit—proving to all that His name is powerful and worthy of all praise and worship. Have a blessed week.