There are no end of fascinating stories that involved Abraham and his walk of faith and since the focus of this series is Unlocking the Power of Your Faith, let's stay with Abraham for the next few weeks. This week, we read,

Some time later God tested Abraham. He said to him, "Abraham!" “Here I am,” he replied. Then God said, “Take your son, your only son, whom you love—Isaac— 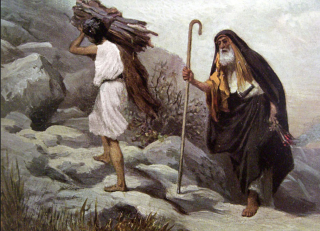 and go to the region of Moriah. Sacrifice him there as a burnt offering on a mountain I will show you.” Early the next morning Abraham got up and loaded his donkey. He took with him two of his servants and his son Isaac. When he had cut enough wood for the burnt offering, he set out for the place God had told him about. On the third day Abraham looked up and saw the place in the distance. He said to his servants, “Stay here with the donkey while I and the boy go over there. We will worship and then we will come back to you" (Genesis 22:1-5).

This is one of the more unusual stories in the Bible, for God asked Abraham to sacrifice the very son that God had given him, the son that represented God's promise to Abraham that he would be a great nation. If God's promise was going to be fulfilled, Isaac had to live.

Notice how available Abraham was to the Lord. When God spoke, he said, "Here I am!" Someone else once interpreted that to mean, "Sir, yes Sir!" Abraham did not say, "I'm busy" or " later, Lord." Once God spoke to him, Abraham did not question or delay in carrying out God's request. He set out on his journey, even though he did not know where he was going, early in the morning. After three days, Abraham saw the place. How did he know it was the right place? God must have confirmed it to him somehow, but Abraham knew and stopped.

By faith Abraham, when God tested him, offered Isaac as a sacrifice. He who had embraced the promises was about to sacrifice his one and only son, even though God had said to him, “It is through Isaac that your offspring will be reckoned.” Abraham reasoned that God could even raise the dead, and so in a manner of speaking he did receive Isaac back from death (Hebrews 11:17-19).

Your faith should also impact what you say and the words you use. Paul wrote in 2 Corinthians 4:12-13:

It is written: “I believed; therefore I have spoken.” Since we have that same spirit of faith we also believe and therefore speak,  because we know that the one who raised the Lord Jesus from the dead will also raise us with Jesus and present us with you to himself.

I am not insinuating that God is obligated to do what you believe and speak. I do maintain that what you believe should finds its way into your vocabulary and conversation. I believe that one day God will give me a best-selling book (maybe He already has and it will sell once I am gone). I believe God is going to bless our orphans in Kenya with fruitful and productive lives so that's what I speak to the Lord, others, and to them. I have well-be-back faith for some things and when I do, I utter we'll-be-back-faith statements.

Where do you need the we'll-be-back faith Abraham had? In what situation do you need to stand in what God promised where your purpose is concerned, the promise He made when He said, "That person is like a tree planted by streams of water, which yields its fruit in season and whose leaf does not wither—whatever they do prospers" (Psalm 1:3)? Where do you need to respond like Abraham did—quickly and with urgency? Abraham was not a perfect man, but in this story, he gave the perfect response—one from which all of us can learn and then apply to our own faith walk to unlock the power of our faith. Have a blessed week!