After Pharaoh refused to allow the Israelites to leave Egypt, God initiated a series of plagues but first He gave Pharaoh one last 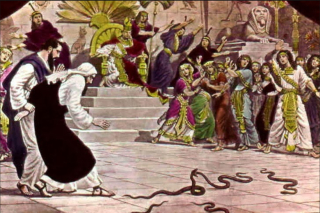 chance to avoid the carnage that was to come to his land:

So Moses and Aaron went to Pharaoh and did just as the Lord commanded. Aaron threw his staff down in front of Pharaoh and his officials, and it became a snake. Pharaoh then summoned wise men and sorcerers, and the Egyptian magicians also did the same things by their secret arts: Each one threw down his staff and it became a snake. But Aaron’s staff swallowed up their staffs. Yet Pharaoh’s heart became hard and he would not listen to them, just as the Lord had said (Exodus 7:10-13).

The magicians could imitate this first manifestation of God's power, only to have God's snake swallow up their snakes while Moses' snake returned to its original state as Moses' staff. The staff was the symbol of Moses' authority and had no power in and of itself. Its only significance was that God had sent Moses to do a job and he would wield his staff to focus everyone's attention on what he was doing.

You should be encouraged, however, that Moses' rod ate up those of Egypt. If God has given you your creative gifts and purpose (which of course He has), then you do not venture out alone or in your own power. You go in the authority of the gift and purpose God has assigned. He will create an audience for you. He will be your agent and promoter. He will carve out a niche where you will be Steven Spielberg or Ernest Hemingway or Michelangelo to your audience. Your creativity will swallow up that of others who have gone in their own power and sometimes resorted to darker powers to find success.

Have you been holding back what you can do because it seems that others' snakes are swallowing up your work? Are you hesitant to create because you are underfunded or underappreciated? If so, then hold back no more. Throw down what God has put in your hand to do and then watch Him gobble up your critics and overcome those who are more powerful but less connected to Him than you are. In the end, your success is not based on having a bigger staff and snake. It is based on who gave you your staff and who turned it into a snake and God's power is always superior to the finest most sophisticated snakes Egypt has to offer.