The plagues began in Egypt with the Nile being turned to blood. Then there was a swarm of frogs throughout the land, but the 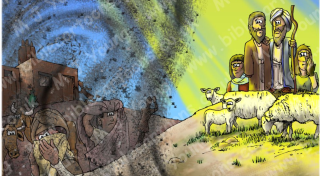 Egyptian magicians were able to replicate what Moses had initiated. Then there was a plague of gnats and it was the first plague the magicians could not match and they told Pharaoh, “This is the finger of God" (Exodus 8:19). Then there was the fourth plague which also brought a major shift in how the plagues were experienced:

“‘But on that day I will deal differently with the land of Goshen, where my people live; no swarms of flies will be there, so that you will know that I, the Lord, am in this land. I will make a distinction between my people and your people. This sign will occur tomorrow'" (Exodus 8:22-23).

The first three plagues also affected God's people living in Goshen, but with the flies, God set them apart from the Egyptians to prove that His favor was upon them. You can always count on this being true that you live in a different world than those who don't know the Lord. He can preserve and protect you while there is famine and lack all around you. That means you can fulfill your purpose and express your creativity no matter the external conditions in which you must function.

That is not all that was different about this fourth plague:

The Lord left it up to Moses as to when this plague would end. Moses prayed and God answered his prayer and stopped the plague. Because Moses was flowing in his purpose, God was listening, as Jesus had promised would happen:

"Very truly I tell you, whoever believes in me will do the works I have been doing, and they will do even greater things than these, because I am going to the Father. And I will do whatever you ask in my name, so that the Father may be glorified in the Son. You may ask me for anything in my name, and I will do it" (John 14:12-14).

Jesus did not make this promise so you could get whatever you want at any time. He made it so that you can do greater works than He did, which you will do when you are in your purpose and expressing your creativity. That is where you can ask, like Moses did, and God hears and responds. What do you need to fulfill your purpose? Ask for it! What do you need to express your creativity? Ask for it! What fruit has God anointed and empowered you to bear? Ask for it in abundance! What wisdom do you need for the work God has assigned you? Ask for it and don't doubt!

Just like He did with Moses, God is waiting to hear from you as a partner in the work He has for you. Don't trivialize or waste this precious connection to the Creator of the universe who has promised to provide whatever you need in order to do His will, but speak bold purpose prayers and see God act on your behalf again and again.