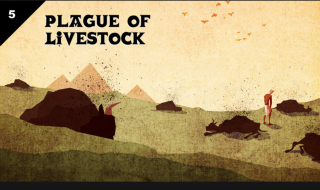 Then the Lord said to Moses, “Go to Pharaoh and say to him, ‘This is what the Lord, the God of the Hebrews, says: “Let my people go, so that they may worship me.” If you refuse to let them go and continue to hold them back, the hand of the Lord will bring a terrible plague on your livestock in the field—on your horses, donkeys and camels and on your cattle, sheep and goats. But the Lord will make a distinction between the livestock of Israel and that of Egypt, so that no animal belonging to the Israelites will die.’” The Lord set a time and said, “Tomorrow the Lord will do this in the land.” And the next day the Lord did it: All the livestock of the Egyptians died, but not one animal belonging to the Israelites died. Pharaoh investigated and found that not even one of the animals of the Israelites had died. Yet his heart was unyielding and he would not let the people go (Exodus 9:1-7).

God is able, if He so chooses, to set His people apart not physically but spiritually from those who do not serve Him. His people don't have to separate themselves or live in a special place. He can do it without making any special designation or distinction. This is actually the message of Revelation, which has been misinterpreted to mean that those who don't know Him will have to wear a mark of the beast. God needs no external marking to know those who are His and those who aren't, and He promises to give special attention to His people who put their trust in Him.

This has important implications for you if you are looking to be purposeful and creative. God can provide for you in ways that are not directly connected to your work so you can continue to do what He has assigned. That means you can create and be purposeful without charging for your services and He can promise to provide (supernaturally if need be) regardless of the economic condition of the culture in which you live. In other words, you can count on God's economy that transcends the secular economy on which the world depends to take care of you.

Where are you not creating because you assume that artists must always "starve"? Are you holding on to a job you hate as if it is the last job in the world? Are you holding back from starting your business or ministry because it's not the right time economically? It's time that you made the transition in your mind from what the world system has taught you about economics to what God has to say. That shift is enough to allow you to live under the benefits and protection of God's transcendent economy no matter what work He has given you to do.