We have all been advised when facing a difficult situation to "give it to the Lord," that the battle is not ours but His. This week, let's 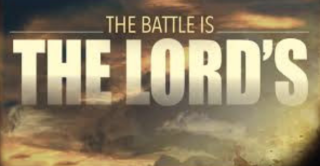 look at where that advice first came from and see how it can help us unlock the power of our faith. The story begins in 2 Chronicles 20:2-4:

Some people came and told Jehoshaphat, “A vast army is coming against you from Edom, from the other side of the Dead Sea. It is already in Hazezon Tamar” (that is, En Gedi). Alarmed, Jehoshaphat resolved to inquire of the Lord, and he proclaimed a fast for all Judah.The people of Judah came together to seek help from the Lord; indeed, they came from every town in Judah to seek him.

The king and people were way ahead of the writer of Hebrews who later penned these words: "And without faith it is impossible to please God, because anyone who comes to him must believe that he exists and that he rewards those who earnestly seek him." The people assembled to seek Him in faith and receive their faith "reward." Let's examine how the Lord responded.

THE WORD OF THE LORD

During their assembly, the prophetic word of the Lord came to the people and Jehoshaphat, their king:

He said: “Listen, King Jehoshaphat and all who live in Judah and Jerusalem! This is what the Lord says to you: ‘Do not be afraid or discouraged because of this vast army. For the battle is not yours, but God’s. Tomorrow march down against them. They will be climbing up by the Pass of Ziz, and you will find them at the end of the gorge in the Desert of Jeruel. You will not have to fight this battle. Take up your positions; stand firm and see the deliverance the Lord will give you, Judah and Jerusalem. Do not be afraid; do not be discouraged. Go out to face them tomorrow, and the Lord will be with you’” (2 Chronicles 20:15-17).

God revealed the battle plan of their enemies and what Judah should do to defeat them, which in essence was not typical military tactics. They were simply to assemble and watch, but they had to address their state of mind in the process. They could neither be afraid nor discouraged. If you want to unlock the power of your faith, you must do the same, talking yourself out of those attitudes and into joy and courage.

The people did as the Lord commanded and actually stood and faced their enemies. Then their king gave them these instructions

Early in the morning they left for the Desert of Tekoa. As they set out, Jehoshaphat stood and said, “Listen to me, Judah and people of Jerusalem! Have faith in the Lord your God and you will be upheld; have faith in his prophets and you will be successful.” After consulting the people, Jehoshaphat appointed men to sing to the Lord and to praise him for the splendor of his holiness as they went out at the head of the army, saying: “Give thanks to the Lord, for his love endures forever.”

The people had to align their words with their faith. It was not a time to pray but a time to praise for God had already spoken and there was no need to remind Him of what He was going to do. it was time for them to stand and trust in what He had promised. It is time for you to do the same. Stop whining and start worshiping!

It is of note that the Lord did not command the people to sing and praise. He only commanded them to stand and watch His deliverance. Their faith action was to expose themselves to the power of the enemy in battle while counting on God's promise to intervene. Their decision to sing was their strategy that would enable them to do what God had said—to stand and watch. They had to do what was counterintuitive based on the circumstances. You may also have to do what doesn't seem right when faced with your opposition. You may have to give to get, to forgive to be free, to go down to move up. What was the result of their praise fest?

As they began to sing and praise, the Lord set ambushes against the men of Ammon and Moab and Mount Seir who were invading Judah, and they were defeated. The Ammonites and Moabites rose up against the men from Mount Seir to destroy and annihilate them. After they finished slaughtering the men from Seir, they helped to destroy one another. When the men of Judah came to the place that overlooks the desert and looked toward the vast army, they saw only dead bodies lying on the ground; no one had escaped. So Jehoshaphat and his men went to carry off their plunder, and they found among them a great amount of equipment and clothing and also articles of value—more than they could take away. There was so much plunder that it took three days to collect it. On the fourth day they assembled in the Valley of Berakah, where they praised the Lord. This is why it is called the Valley of Berakah to this day (2 Chronicles 20:22-26).

The people had faith leaders and obeyed they all obeyed the word of the Lord. They had faith, acted on their faith, and then sang God's praised of deliverance before they saw the actual victory, basing their faith on God's promise. That's good advice for you to follow if you are serious about unlocking the power of your faith. Seek the Lord, listen for His response, follow His directions, trust Him, and sing His praises. If you do those things, you will certainly watch as your enemies fall before you and then you will get to collect the bounty the Lord has in store for His faith-filled people. Have a blessed week.